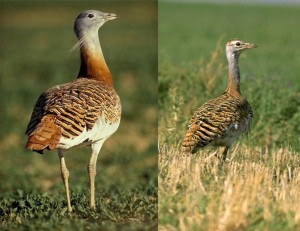 The most significant characteristic of the Great Bustard is its large size. Males (left) may weigh up to 15 kg, while females (right) rarely exceed 4-5 kg and have a more slender silhouette and more cryptic plumage. This species shows one of the highest sexual size dimorphism among Vertebrates. During most part of the year both sexes live in separate flocks. This is just one of the consequences of the strong sexual size dimorphism, which determines marked sex differences not only in food requirements, but also in their breeding, dispersal and migratory behaviour.

Males develop in spring a colourful breeding plumage that they exhibit during sexual display in front of other flock-mates and females. Tufts of modified feathers, the so-called moustachial feathers, grow at each side of the beak. Each year these feathers grow longer, reaching over 20 cm in old males.

Females tend to flock with genetically related individuals. They are more gregarious and philopatric than males, remaining frequently at their natal areas throughout their entire lives. As could be expected from the strong sexual size dimorphism, the sex ratio is naturally skewed toward females, so that the latter can easily double males in number. The sexual selection pressures acting upon males are the cause of their higher natural mortality, as well as their higher vulnerability to human-induced threats.

During display, males turn up their wings and tail to show their pure white ventral parts. This is how they try to attract females for mating.

Sexual dimorphism in size is also related to the strong sexual selection and polygyny that are characteristic of this species. All males of the breeding group gather at traditional display arenas, termed leks, where they fight in winter and early spring for a higher position in the flock hierarchy. In spring, all adult males of the flock display at the lek site to attract females. Only the best males of the group will succeed in mating, and some of them will copulate with several females. Females visit the display arena and choose their mates among displaying males. Incubation and chick rearing is exclusively performed by females. 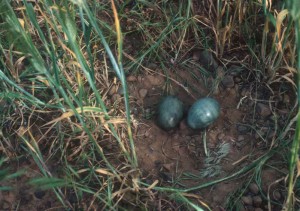 Nests are shallow scrapes in the ground partly covered with some dry vegetation. Females lay one to three greenish, brown spotted eggs. The chicks hatch from late May onwards, after four weeks incubation.

Although most females older than two years attempt to breed every year, on average only 10-12% will rear a chick per season. The offspring have a prolonged maternal care period of six to over twelve months.