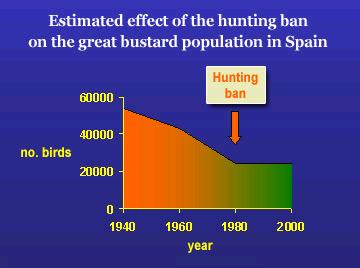 The graph shows the estimated effect of hunting during the last four decades in Spain. A marked decline in Great Bustard numbers probably occurred due to high hunting pressure immediately before the hunting ban in 1980 when, according to reports from the hunter E. Trigo de Yarto, official hunting bags reached over 2000 birds annually. We suggest that the hunting prohibition has allowed a recovery of many populations, some of which are even slightly increasing today. However, these increases are compensated by declines at other areas. Thus we believe that the overall population has remained more or less stable at around 30000 birds over the last two decades. 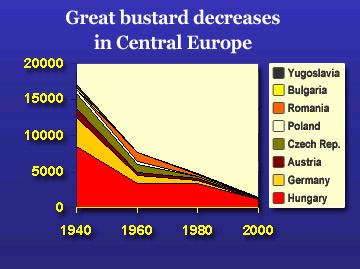 Most central European populations have suffered dramatic decreases during the 20th century due to hunting and agricultural intensification. In many countries the species went extinct, whereas in others the small groups that survive are seriously endangered. In Russia, Turkey and China Great Bustard numbers are still relatively high, although their conservation status is much less secure than in Iberia. In Morocco, the only African country where the species is present, it is severely endangered by hunting and other human pressures. Recently, populations are recovering in some countries (Germany, Austria, Hungary) due to the implementation of conservation and management measures.